Although some might say it is only a recent phenomenon, vocal fry has been around forever but has snowballed in popularity only in recent years. In earlier years, there was no such name for vocal fry but after being studied more it has become known by a number of names. Before going any further, I better explain to you just exactly what vocal fry in depth.

The Definition and Uses

Vocal fry is speaking or singing in the deepest vocal register. This is done by having a loose glottal closure and allowing air to gradually move upward. When air makes its way through this closure, the low grumbling sound that is vocal fry is produced.

Vocal fry allows singers to belch notes much lower than possible in a chest voice. We are talking way lower (many octaves).

If this helps singers reach lower notes, you might ask, why is there a big debate on the use of vocal fry in society?

Well, vocal fry extends far beyond the realm of singing and is now a part of many people’s speech. It is often associated with the ditsy blond stereotype. Of course we don’t generalize all blonds to be the way that movies and raunchy jokes portray them as, but let’s just roll with it for the sake of making this easy to understand.

Why Do People Hate it So Much?

This behavior has been associated most recently with the family that everybody loves to hate. If you guessed the Kardashians, you are correct! Vocal fry being a behavioral trait and not an inherited one leads one to assume that this is being done for attention or to help play the role of the dumb female that everybody loves. 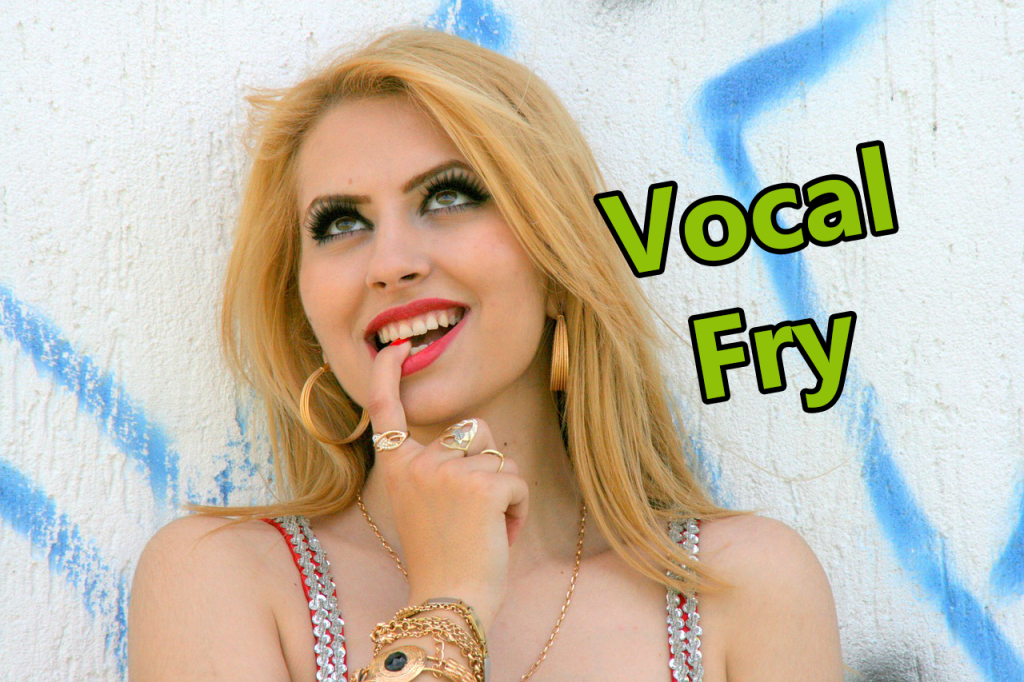 Let’s take a step back for a minute though and just think about how trivial this idea really is though. Every person has fluctuations in their voice when they speak at least to some extent. Even Microsoft Sam has a little bit of a volume and tone difference when he speaks. So if speech robots and every person walking this Earth naturally speaks in different tones all the time, what’s the big deal with vocal fry?

There really is no reason to hate this glottal speaking. The hatred towards vocal fry stems from a much deeper hate for the people that use vocal fry. By that, I mean people love to hate celebrities like Paris Hilton and Kim Kardashian and thus any behavior that makes these women slightly different from the person passing judgment gives reason to hate. People don’t hate vocal fry as much as they hate a lot of the people that are notorious for using vocal fry.

Is it an Insult or a Way of Speaking?

Worth mentioning is that some people use vocal fry in a more strategic way to emphasize what they are saying. Should these people be placed in the same category as those who may be using this method of speaking for attention?

Another idea is that vocal fry was only coined a term so that it can be used against women. Whether it be a male or a female, it surely could be a way to attack someone and degrade them. Saying that a woman uses vocal fry too much could be a to call her ditsy, in other words.

A study of college girls showed that two-thirds of the sample group use vocal fry when speaking. If a majority of women and some men are doing this when they speak, is it not a considered a “norm” at this point?

So Really, Why is Vocal Fry Even Relevant?

The whole idea of vocal fry is overhyped in itself and to judge someone on such a frivolous thing such as the way they fluctuate their voice into a lower registry is shallow, but that could just be me. The only real reasons to hate on vocal fry is that it can damage a person’s voice and is often harder for people with hearing disabilities to understand. Discussion on vocal fry seems to really just be splitting hairs.

Does vocal fry bother you or do you use it in your everyday speech? Let us know in the comment section below.