Smoking And Your Voice- How It Affects Your Singing Career

Your voice is a very sensitive instrument and should be treated with proper care, especially if your career depends on it. The entertainment industry is choke full of drug use, and one of the most common habits in the music industry is smoking. This is because it’s associated with a rebellious persona which most artists rely on to amass a huge number of fans. However, anyone who wants to pursue a career in music should think long and hard about indulging in this harmful habit, as it’s probably one of the leading causes of the death of many performers’ careers. 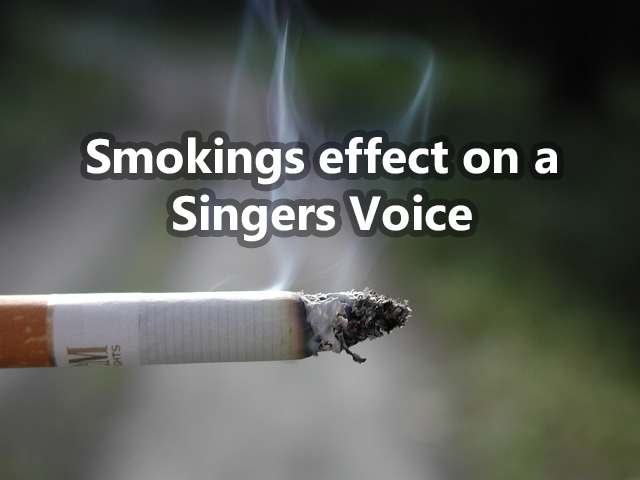 Avoid Even Being Around Smokers

Smoke- be it from marijuana or tobacco- is a harmful irritant to your throat, and medical professionals have stated that even being in a smoky room could affect your voice negatively. One of the effects it has is that it tends to dry up your vocal cords, thus resulting in a build up of mucus in your throat, which could affect your vocal projection. Moreover, you may develop a cough which further irritates your cords.

Tobacco smoke is also known to cause acid reflux. This sounds like an easy problem to solve, as most people tend to get acidity from the foods they eat occasionally. However, you should know that even the smallest amount of belched up hydrochloric acid could destroy your singing voice for good. This is because the acid causes swelling in your cords and this disrupts their normal vibration, thus changing how your voice sounds. Acid reflux could also lead to the development of a persistent cough which may cause a number of lesions to form in your throat.

Smoking is also known to reduce proper function in your lungs. It’s not a secret that smoking is the leading cause of lung cancer. This fact should be able to stop most smokers who sing from lighting up that cigarette- but it doesn’t. Before we even skip to the cancer, which is obviously the final stage in the death of any smoker’s music career, let’s look at what happens before you get there. First, you’ll probably end up with laryngitis and bronchitis. These conditions weaken your lungs as the air that flows from your throat to your lungs decreases significantly. This is a major concern as singing requires one to either hold a note in one breath, or go through a couple of them without a break. If you can’t breathe properly while walking, be sure that your vocal range, and ultimately performance, will be affected.

Throat cancer is another effect of smoking, and the most common symptom is voice hoarseness. It usually affects the quality of your voice, and more often than not, your vocal range tends to suffer. Many people overlook this, especially if it’s accompanied by a running nose and other flu-like symptoms. However, it’s advisable to go for a check up if the situation hasn’t changed or is worsened in two weeks.

Smoking also has adverse effects on your appearance, and every singer knows that the longevity of their career depends on their appearance just as much as it does on their talent. One of the things smoke ruins is your teeth. Bad breath, discoloration and gum disease destroy your smile and ultimately your social life will suffer because your confidence tends to slowly wane with the beauty of your smile.

Other Effects of Smoking

Smoking also leads to premature aging as it tends to speed up the wrinkling of your skin. This is because nicotine cause thinning of your blood vessels and slows down the natural rate of blood flow. Your skin is then depleted of oxygen and Vitamin E, which are vital for maintaining your skin’s elasticity.

Cigarette toxins also cause thinning of your hair as they affect the hormones which are essential in hair growth. This could lead to baldness.